Based on the book of the same name by Sister Helen Prejean, C.S.J.

Now one of the most performed American operas of all time, Jake Heggie’s first opera Dead Man Walking was commissioned by and premiered at San Francisco Opera in 2000. Dead Man Walking is based on a 1993 memoir of the same name by Sister Helen Prejean, which was subsequently made into an Oscar-winning movie starring Susan Sarandon and Sean Penn. It is a heart-wrenching story of grief, grace and redemption, recounting Sister Helen’s courageous struggle to provide spiritual guidance to a condemned Louisiana murderer in the months leading up to his execution.

Heggie has become the leading living American composer of operas, having also written The End of the Affair, Three Decembers, Moby Dick, If I Were You and It’s a Wonderful Life. Sara Jobin (most recently Evgeny Onegin, 2015) returns to conduct. Director Kristine McIntyre, who has staged the opera in Kansas City, Des Moines, and Madison, makes her Opera Idaho debut. 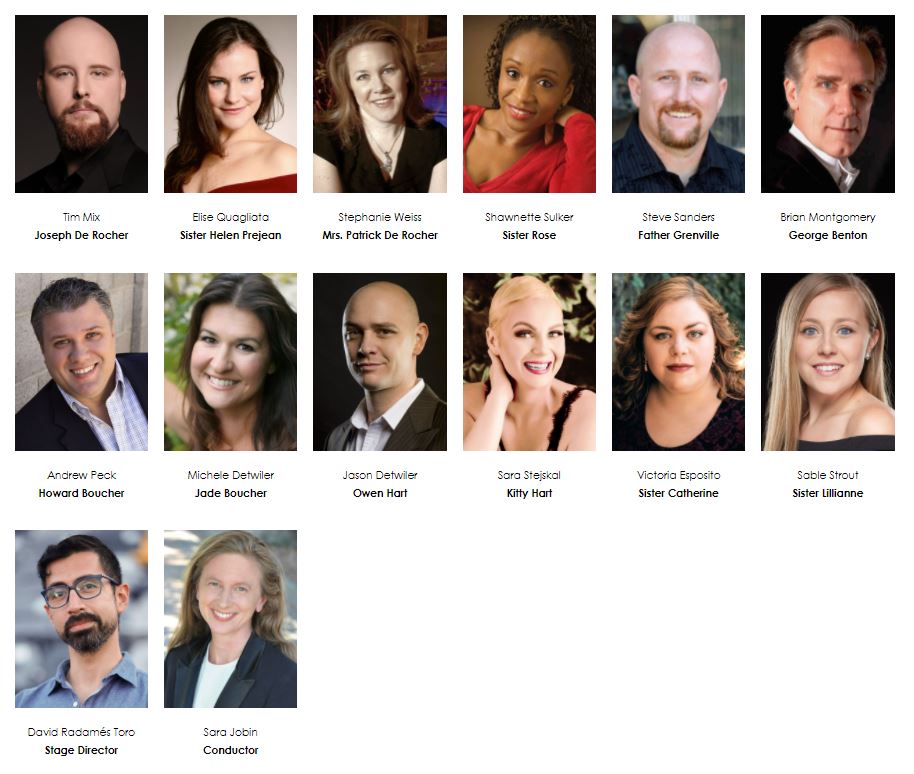 Prologue: A teenage boy and a teenage girl are parked near a secluded lake at night, on a date. They have the radio on in their car, and are making out to its music. The De Rocher brothers, hiding nearby, emerge from the shadows, quietly. One turns the radio off; the two brothers attack the teens. Anthony grabs the boy, who begins struggling; Joseph attacks the girl and begins to rape her. The boy continues struggling until Anthony shoots him once, at the base of the skull, execution-style; this causes the girl to scream. In a panic, Joseph stabs her until she is silent.

Sister Helen, with the aid of some of the other sisters, is teaching the children a hymn; this hymn, “He Will Gather Us Around”, becomes Helen’s leitmotif during the course of the opera. After the children leave, Helen reveals to her colleagues that she has heard from an inmate on death row with whom she has been corresponding. He has asked her to be his spiritual adviser through his execution, and she has decided to accept. The sisters are shocked, warning Helen of the dangers of her position, but she is firm.

Scene 2: The drive to the prison

Helen drives to Louisiana State Penitentiary (Angola) and muses on her acceptance of De Rocher’s request. She is stopped by a motorcycle policeman for speeding, but he lets her off with a warning after a short humorous soliloquy; “I never gave a ticket to a nun before. Gave a ticket to an IRS agent once&hellip; got audited that year. Tell you what&hellip;”

Helen arrives at the prison and is met by Father Grenville, the prison chaplain, who conducts her inside.

Father Grenville criticizes Sister Helen’s choice to work with De Rocher, claiming that the man is unreachable; he tells her that she’s in over her head. Helen responds that it is her duty to attempt to help the man. Father Grenville leaves her to meet with Warden Benton, who asks many of the same questions and also criticizes her decision. He conducts her to Death Row to meet with De Rocher.

Warden Benton and Sister Helen walk through Death Row to reach the visiting room. They’re heckled by the inmates (chorus) who in turn shout profanities at her and ask her to say prayers for them.

Warden Benton conducts De Rocher into the visiting room. He is friendly and easy-going. They converse; he asks her to speak at the pardon board hearing on his behalf to have his sentence commuted to life. He seems convinced that she will not return to help him; she assures him that such is not the case.

Scene 7: The pardon board hearing

Sister Helen is present with De Rocher’s mother and two of his younger brothers, who plead with the pardon board on his behalf. One of Joseph’s victims’ parents lashes out at her in anger.

The four parents of De Rocher’s victims speak angrily to his mother and to Sister Helen, who tries to calm both sides. The parents accuse her of not understanding their pain and sorrow. Word comes from the pardon board; De Rocher has not been granted commutation. Barring intercession from the governor for clemency, he is to die for his crime.

De Rocher is convinced that Helen has abandoned him; she enters, late, and tells him that she has not and will not. He is angry and rejects all her suggestions to confess and make peace with his actions. The warden enters and tells Helen to leave at once.

Helen is trying to find money to buy food from the vending machine, having forgotten to eat. She begins to hear the voices, in her head, of the parents, the children at Hope House, Father Grenville, the motorcycle policeman, Warden Benton, and her colleagues, all telling her to stop trying to help De Rocher. The warden enters to tell her that the governor has refused to act to save him, and gives Helen some money for the machine. She stands for a moment, then faints.

A guard enters and tells De Rocher, who is doing pushups, that his execution date has been set for August 4. The guard leaves; Joseph muses on his fate.

Helen wakes up in terror from a nightmare, alarming Sister Rose, who begs her to stop working with De Rocher. Rose reminds her that she has not slept well since she began helping him. Helen says she cannot; the two women pray for the strength to forgive De Rocher.

It is the evening of the date set for the execution. De Rocher and Sister Helen are talking; they discover they share a common love for Elvis. For the first time he admits that he is afraid. She reassures him, urging him to confess and make peace with what he has done; again he refuses. The warden enters and informs them that his mother is there to see him.

Mrs. De Rocher and her two younger sons have arrived. Joseph visits with them, and tries to apologize; she does not hear him, preferring to believe to the end that he is innocent. She complains that she baked him cookies, but was not allowed to bring them in. She asks Helen to take a last picture of the four of them together with the camera in her purse. The guards lead Joseph away; she looks after him, reminiscing, near tears, eventually losing control. She thanks Helen for all that she has done; Helen promises to take the cookies for her.

Scene 5: Outside the Death House

Helen speaks with the victims’ parents. One of them, Owen Hart, takes her aside and confesses that he is less sure of what he wants now than he was; he tells her that he and his wife have separated due to the stress they have felt. Helen tries to console him; they agree to part as “Fellow victims of Joseph De Rocher”.

Helen and De Rocher converse for the last time; she asks him to confess to the murders. This time, something in him snaps; he breaks down and tells her the entire story. He expects Helen to hate him; instead, she says she forgives him, and that she will be “the face of love” for him. He thanks her. Father Grenville enters and begins the final preparations for the execution.

Guards, inmates, the warden, the parents, the chaplain, and protesters assembled outside the prison sing the Lord’s Prayer as Sister Helen reads a passage from the book of Isaiah. They approach the death chamber, and Helen is separated from De Rocher. The warden asks if he has any last words; he says he does, and asks forgiveness from the parents of the murdered teenagers. The warden gives the nod, and the execution proceeds. De Rocher dies thanking Helen once again for her love; the opera ends as she stands over his body and sings her hymn one last time.